On August 10, Meihua Holdings Group and municipal government of Baicheng city, Jilin province signed a cooperation agreement of 3 million tons of corn deep processing project. The project is settled in Baicheng Industrial Zone, and the total investment in it has created a record for Baicheng city’s single industrial project investment scale.

The Secretary of Baicheng Municipal Committee Pang Qingbo addressed a speech for the ceremony. He said in high spirits, “we believe that Meihua’s operation philosophy of “industry based on great virtue, benefit spread to people's livelihood” and enterprise spirit of “honesty, integrity and success”, will definitely infect and inspire the 2 million Baicheng people to forge ahead, to make unremitting efforts for a better life.

President of Meihua Group Wang Aijun places great expectations on this project. She said that with a lot of layout in Northeast China of the current breeding industry and feed enterprises, demand of threonine and lysine will welcome a substantial increase in the next two to three years and the market prospect is optimistic. The investment of the project in Baicheng is to further expand the company's production capacity and to maintain the leading position in the global market. The project not only accords with national policy orientation of revitalizing Northeast China, but also fully absorbs the surplus corn resources in the northeastern region, which solves the difficulty of farmers’ selling grain.

On the ceremony, the mayor Li Mingwei, Secretary of the Party Working Committee of Baicheng Industrial Zone, Director of the Administrative Committee Liang Zijun and General Manager of Meihua Group He Jun signed a project investment contract.

The project is divided into three phases, which is expected to be completed in six years. 2.5-3.5 billion yuan is planned to be invested in Phase I, including the construction of a project with an annual output of 400,000 tons of amino acids and its supporting projects. After the whole completion of the project, the annual corn processing can reach 3 million tons, the annual production value will be 15 billion yuan, and paid taxes will be more than 800 million yuan.

The reason why Meihua Group “fancies” Baicheng city is inseparable from its unique geographical advantage and the huge development space of corn industry.

Baicheng is located in the junction of three provinces: Jilin, Heilongjiang and Inner Mongolia, and belongs to the main corn producing areas, but the corn deep processing industry is nearly blank, with huge development space. The Baicheng-Meihua project will be located in the north of Tongliao city’s Meihua company, with the two echoing each other, resource sharing can be achieved and synergistic effect can be formed.

The project is planned to be constructed and put into production operation by Meihua Group’s wholly owned subsidiary - Jilin Meihua Amino Acid Co., Ltd. (proposed name), with phase I starting construction in September this year and reaching production in October next year.

The contract stipulates that the company uses new technology and new process to produce amino acids. The word “new” is the secret of Meihua quickly dominating the field of amino acids, and the ability of rapid innovation and iteration is the magic weapon for Meihua to create a reputation within the industry.

Tongliao Meihua created Era 1.0, characterized by technology innovation and integration, while Xinjiang Meihua entered Era 2.0 with characteristics of high-tech equipment and automatic control; Meihua’s Baicheng project will definitely stand at a higher starting point, to create the 3.0 version of the top factories in amino acid industry with higher intelligence, higher level of equipment, higher technology integration and better environmental management, and will establish a new benchmark for the industry.

After the completion of Baicheng production base, Meihua Group’s national layout will be formed with three amino acid production bases, and its leading scientific and technological advantages and scale advantages will be more impregnable.

Baicheng - one of the four major agricultural development zones in China 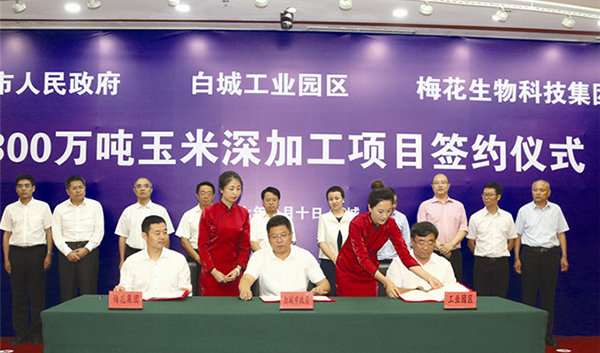